A cult classic goes online! Futuristic warfare in 100 tonne death machines where the screams of your enemies can't be heard over the sounds of explosions!

Did I take time off for the BattleTech release? 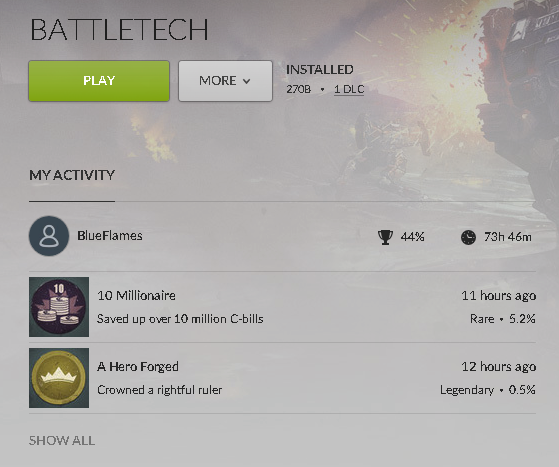 Yes. I might have missed out on some sleep too.

By way of a review: I regret nothing.

By way of a deep strategy post: Find a pilot with the sassy, Russian-accented voice actress and hire her immediately. She's got some grade-A sarcasm available for most any situation. Also, always been entrenched.
^

Re: HBS BattleTech - Five Days In

Okay, an actual strategy post, specifically about the business side of the campaign:


Having put a disgusting amount of time into the single-player campaign, I'm starting to think that the Argo is a white elephant. At the very least, if you indiscriminantly buy all the upgrades, the ship will become more costly than it's worth.

What really jumped out at me was the recreation upgrades. Each of these upgrades provides +1 or +2 morale. That's a one-time bonus upon completion of the upgrade, mind you, not an extra point of morale per month while the upgrade is active. Their initial cost ranges from 225k to 450k C-bills, and despite being a one-off bonus, they carry an ongoing monthly cost of 850 to 1700 C-bills. The monthly cost seems like a token amount, until you consider that the campaign takes about two in-game years, and if you continue playing past the end of the campaign, that token maintenance cost will continue in perpetuity. Thinking about how long you'd have to play for the perpetual maintenance cost of the recreation upgrades to no longer be worth the benefit of one or two morale points, I realized that even the initial costs are way out-of-whack.

Every month, you get your financial report, laying out your operating costs for the previous month and letting you set your spending level for the next month. Raising your spending above normal for a month increases morale. If you go back to normal spending levels in subsequent months, that point or two of morale that you effectively bought remains. You only lose morale if you reduce spending levels below normal.

What is the difference in cost between normal spending and generous spending for one month? With eight pilots on staff, twelve mechs active, and a mostly-upgraded Argo, that difference is around 250k C-bills. For 250k C-bills and no additional ongoing maintenance costs, I can buy a point of morale, or I can spend up to twice that much and take on a recurring maintenance fee to put a bigger television in the lounge.

There are random events tied to the basic lounge and hydroponics that might alter your cost calculation for those specific upgrades, but the rest of that catagory I think you can safely leave alone, in favor of buying morale with generous pay levels as your cash reserves allow.

My eye is next drawn to the medical and mech refit upgrades. I haven't worked out any numbers yet, but foregoing medical and mech refit upgrades will result in longer down time for pilots and mechs. Longer down time means keeping more pilots and mechs in reserve to keep you going from contract to contract without delay. There are usually two to three contracts in a star system that you can do one-after-another, without having to travel. Travel time between systems separated by a single jump gives your pilots and mechs two to three weeks for recovery and refit.

How many pilots does each med bay upgrade keep you from having to hire? How many mechs do you not need to keep readied because of the faster refit times provided by the refit upgrades? Where do the salaries and maintenance fees of those additional pilots and mechs balance out with the maintenance fees of the prescribed upgrades? I don't know yet, but I suspect that buying everything is not the most cost-effective strategy.
^
Post Reply
Topic tools
2 posts • Page 1 of 1