A cult classic goes online! Futuristic warfare in 100 tonne death machines where the screams of your enemies can't be heard over the sounds of explosions!

I wasn't going to write a build post this month. I wasn't going to do it. But I'm weak. I was sitting on ~25 million C-bills, and there were Cauldron Born builds already rolling around in my head. Now, I've got two of the things and enough builds to talk about the chassis.

If you're looking to make Cauldron Born builds, the very first thing you notice is that you can cobble together almost any combination of energy and ballistic hardpoints that you could possibly desire. Triple-ballistic? You've got it. Nine energy? Done. Nine energy with two ballistics? Seven energy with three ballistics? Yes and yes, you mad bastard.

Missile hardpoints are are more sparse, but the chassis is poorly-suited for missile weapons (and was so even when missile weapons weren't really awful). The torso is very wide, and the arms extend some distance out from the main body of the mech. This wide spread of the hardpoints exacerbates the spread of SRMs and can create convergence issues with PPCs and ballistic weapons, if you have them mounted on opposite arms. With PPCs and ballistic weapons, though, you can select omnipods that allow those weapons to be placed on one component or two adjacent components. There is only a maximum of one missile hardpoint on any given omnipod, so if you want a battery of three or four SRM launchers, they will necessarily be scattered all across the mech.

The Cauldron Born's quirks all require a matched set of eight pods. There are a couple of specific sets that I want to bring up, but that's specific to particular kinds of builds, so that discussion will come deeper in the post.

Finally, last month, I mentioned the Sun Spider being branded as squishier than it actually is. The Cauldron Born can actually be a bit of a squish. Its center torso is enormous and readily visible from the side. It's really rare to lose a side torso, because even when you're trying to shield, it is pretty easy for an attacker to find CT. And if they can't find your center torso, the Cauldron Born's legs are magnets for incoming fire. The arms can provide some shielding, but you have to remember to twist and turn more than ninety degrees away from your attacker, since the arms hang a little behind the bulk of the mech's torso. Likewise, the side torsos with multiple energy hardpoints or any ballistic hardpoints will add an overhead pod for the first ballistic weapon or second energy weapon that you mount in that section. This can give your center torso a little more cover from shots coming in from above and make your side torso armor functional.

With the squishiness of the Cauldron Born already being quite well-known, I wanted to start with long-range options. It can also fit a lot of heat sinks, so I started with a PPC sniper. Two problems plague this build, but you only really notice one of them, and that's the heat. Most of the time, you can fire the lasers or the PPCs but only both when you're prepared to shut down. Given the range at which the ERMLs are functional, there are a lot of occasions where not being able to fully utilize both weapon systems feels like it hamstrings the build. Swapping for cooler, closer-range lasers doesn't work because it just hamstrings the mech in much the same way in that you can only use half your weapons at any given time, just for a different reason. A third PPC is right out, since experimenting on the Sun Spider showed that twenty-five heat sinks is insufficient to run a triple-PPC build effectively.

We'll come back to long-range in a minute, but my next decision was to go full-glass cannon. Eight medium pulse lasers can put a pretty significant hurt on someone in pretty short order. If you can sneak around behind the enemy line, you will get back kills with this build. This isn't a Linebacker, though. Prior to unlocking the mobility tree, your speed is capped at 81kph, and it's tough to sneak around in a timely manner at 81kph. At 87kph, that task is a little more manageable, but you're more likely going to be operating on the flanks or in stand-up fights with isolated mechs than you are to be doing assassinations from the back. To that end, you need to consider that you'll be stagger-firing your lasers in groups of four, with half a second between the start of each burn. That means that the MPLs' normal burn time of 0.9 seconds is actually 1.4 seconds at a minimum. Best not to face-tank in a squishy mech, if you can avoid it.

In grand irony, the way to get the beam duration down on the above build is to swap in a laser with a longer burn duration. Trading off three of the MPLs for a large pulse laser gives you a build that cannot trigger ghost heat. With this build, you can do your full damage in 1.1 seconds and twist away to (try to) keep a little more damage off of your center torso. The build is also a little more heat efficient, so that as long as you can manage incoming damage, you will remain a greater threat in protracted engagements.

What about that long-range puzzle, then? The obvious answer is to drop the PPCs in favor of a Gauss rifle. Despite dropping heat sinks, the heat of this build is much more manageable. That ultimately only serves to unmask the problem that the PPC build hid underneath all the heat problems: beam duration. The base beam duration on ER medium lasers is currently 1.25 seconds, which is just too long for what they do. They force you to keep your head up, when you'd otherwise be able to twist away from incoming fire and back down into cover immediately after firing the Gauss rifle (or PPCs on the first build), but ERMLs force you to stay fully exposed for far too long.

There's really no good mid- to long-range lasers for Clan mechs. They all run hot and have stupidly-long beam durations. Nothing is going to pair well with the Gauss rifle, except PPCs or maybe large pulse lasers.

You know what was fun? The old UAC20+6ERSL Loki. Autocannons are just so so satisfying. Screw it. I've got a chassis with ballistic hardpoints available and more free tonnage than the Loki. What are the autocannon options in the current game balance?

Big UACs are right out. The EBJ-A omnipod set comes with a -20% jam chance quirk for UAC20s, and the EBJ-C and EBJ-D omnipod sets have slightly smaller jam chance quirks for all UACs. Those quirks only drop the base 17% jam chance to between 13% and 14.5%, and after taking both Enhanced UAC skill tree nodes, jam times will still be 6.8 seconds (down from a base duration of eight seconds). That's just not reliable enough for a mech's primary weapon.

LBX cannons are right out. They still spread damage like crap, unless you are literally rubbing the gun barrel against your target when you pull the trigger. Bonus crit damage doesn't make up for lousy damage spread.

When I've got an IS chassis that I want to pair with a big autocannon, what do I run? AC10s and AC20s. IS UACs and LBX cannons have the same problems as their Clan counterparts. Why not run regular AC10s and AC20s on Clan mechs?

Huh.... Why not run regular AC10s and AC20s on Clan mechs? The answer used to be, "Because UACs are so obviously superior," but that's no longer the case because of the adjustments to their jam mechanics. Clan ACs haven't gotten any better, but because everything else on the menu has gone to crap, they look more appealing by comparison. Behaving like a short-duration laser, the three-/four-round bursts focus damage better than LBX cannons, and because you cannot double-tap with regular autocannons, they do not jam.

Armed with this new mindset, my first idea was to go big right away: AC20 and five medium pulse lasers. This build bursts out an impressive amount of damage, even without the UAC20's double-tap. The medium pulse lasers run the mech up to its heat capacity really quickly, though--it doesn't have twenty-six heat sinks like the LPL+5MPL build. Normally, when running hot, you'd lean on the autocannon to keep doing damage, but three tons of ammo doesn't let you do that for long.

Switching the lasers to small pulse lasers frees up room for another ton of ammo and deals with the heat problem all at once. In both cases, this is a case of the pendulum swinging too far, though. With the AC20's long cycle time and without the ability to reliably double-tap, four tons of ammo takes forever to expend, and the small pulse lasers underutilize the mech's heat capacity.

To deal with the AC20's long cycle time, I wanted to trade it out for two AC10s. That means finding eight tons. Fortunately, it only means finding eight tons, since switching from an AC20 to AC10s means switching from the ammo type with the worst damage-to-weight ratio in the game to the ammo type with one of the best damage-to-weight ratios in the game. Three tons come from swapping the small pulse lasers for ER small lasers, and the remaining five from stripping out heat sinks. The resulting build hits a sweet spot that belches out damage, uses its heat capacity, and has the ammo to last in a good solo queue match. No jamming. Minimal damage spread. You've got to be on top of your game to shield your huge center torso in a brawl, but if you can manage that, then this build will provide damage and kills.

Again, I hadn't planned on writing this build post. I fully expected that the number of builds would wind up being small and predictable. When I figured out that maybe standard ACs were worth using by virtue of all the other autocannons getting nerfed, that was a topic worth addressing as much as the chassis that I was building for when I figured it out. There's other mechs worth revisiting, with the knowledge that ballistic and mixed energy-ballistic builds are back on the table.

Oh, and the new mech bay looks pretty nice. Well done, PGI, for finally letting us have a walk around our mechs. 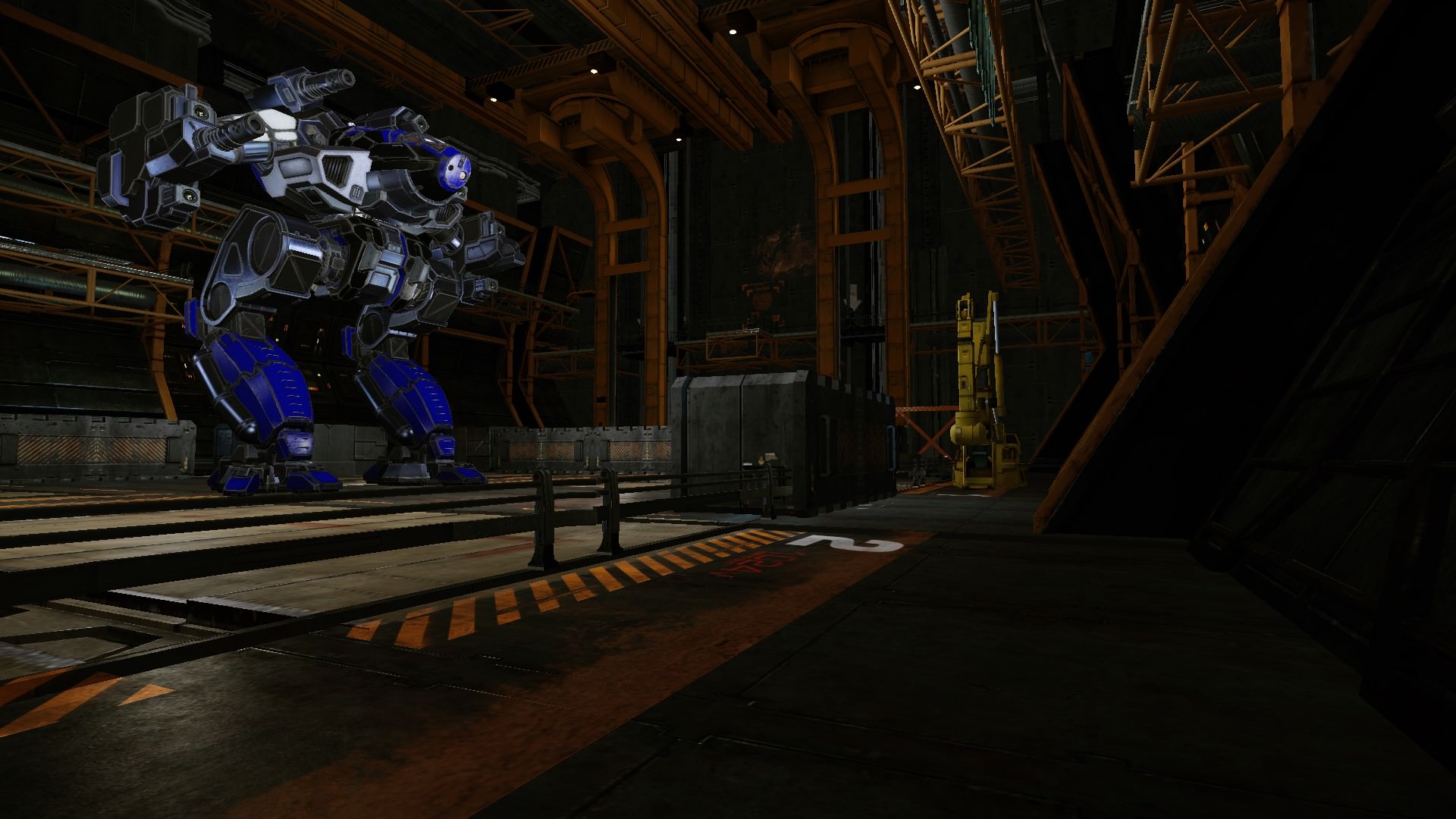 Next month, you are definately not getting an MWO build thread from me. Harebrained Schemes is releasing their turn-based Battletech game this coming Tuesday, so that will be what eats up my free time over the next month.
^
Post Reply
Topic tools
1 post • Page 1 of 1